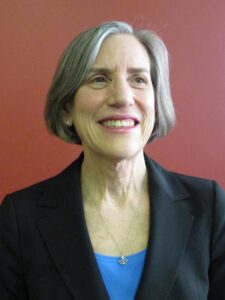 The American Bar Association’s Commission on Domestic and Sexual Violence (ABA) awarded Terry L. Fromson and 19 others with their 20/20 Vision Award on August 1st, 2015. The 20/20 Vision Award was created to acknowledge contributions to a better response to sexual and domestic violence. Fromson, who was instrumental in helping to improve police and legal efforts around sexual assault and domestic violence (DV) in Philadelphia, also headed a national campaign to end the discrimination of victims and survivors of domestic violence by insurance companies, which viewed DV as a risk factor. Now, 45 states (including Washington D.C.) have laws ensuring that insurance companies cannot deny coverage due to experiences of domestic violence. When asked how she sustained long campaigns addressing difficult subjects, she noted that in addition to enjoying art, music, and theater as a form of self-care, she works in a supportive office environment at Women’s Law Project with aware and helpful colleagues. Fromson currently works on the Pennsylvania Agenda for Women’s Health because it “addresses inequities in all facets of society that adversely affect women’s health.” Vice President Joe Biden was also honored for the 1990 Violence Against Women Act, and Senator Leahy for the 2013 Violence Against Women Reauthorization Act. Learn more about Terry’s work here.